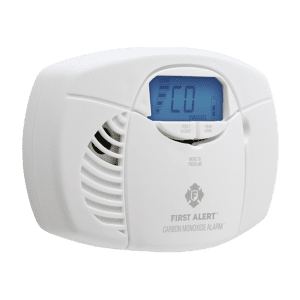 Carbon Monoxide is a poisonous gas that is a by-product of combustion. Whenever we burn something, Carbon Monoxide (CO) is released. Many items in a home can produce CO. If you have gas burning appliances such as a range or oven, furnace, water heater or fireplace, you could be exposed to CO if the appliances aren’t properly installed or maintained. Even an attached garage can create a CO hazard because cars continue to emit CO after they are shut off.

Many States have enacted laws that require CO detectors in homes. These laws are long over-due. Now that CO detectors are cheap, every home should have one. In our opinion they are as important, if not more, than smoke detectors. Smoke can usually be seen, smelled, and even felt if it is warm. CO on the other hand is odorless, colorless, and can be a silent killer. You don’t need a huge house fire to have a CO hazard. It can come from some very small amounts of combustion.

A common mistake is when people refer to Carbon Monoxide as CO2 which is Carbon Dioxide. CO2 is totally different and is not dangerous. (CO2 is the gas that is often blamed for global warming, but that is a different topic). Let’s stick to hazards in your home. CO2 is what makes carbonated drinks bubbly. CO on the other hand, can kill you.

How Does Carbon Monoxide Kill You?

Carbon Monoxide is a tasteless, odorless gas. Detection in a home environment is nearly impossible by humans. The symptoms of CO poisoning are similar to the flue. Nausea, vomiting, confusion, sore muscles,
headache, dizziness, light headedness, loss of balance, etc. Often, people who experience these symptoms simply go to bed thinking they are coming down with a cold. Some never wake up.

According to the Center for Disease Control Red Blood Cells pick up CO more easily than Oxygen. If there is enough CO it can prevent the oxygen from getting into the body causing tissue damage or death.

Surprisingly there are poor statistics for CO deaths in the Unites States. The CDC reports that and average of 439 people died annually between 1999 and 2004 from non-fire related CO poisoning. Many more people are hospitalized due to symptoms of CO exposure. During the heavy snow storms of 2013 on the east coast of the U.S. and Canada, a young boy died in their family car in the short time it took the father to dig the car out of the snow. Snow drifts blocked the exhaust pipe and CO entered the cabin of the vehicle. That’s how quickly CO can kill you.

Some of the first practical CO detectors were developed by Bell Labs for the telephone workers who had to enter confined spaces such as man holes. They were typically made of paper and would turn brown or black when exposed to CO.

Battery powered CO detectors became available around 1993. These
units were moderately expensive, and like any new device, people were in no hurry to buy one. As more states passed laws requiring the installation of CO detectors in homes the price has come down substantially. You can now get a CO detector starting under $20.

There are two types of CO detectors commonly available:

Electromechanical:
This is the dominant technology used in the United States. A sensor creates an electric charge which varies with the amount of CO present. They use little power, and operate at room temperature.

Biometric:
These detectors have a sensor which changes color in the presence of CO. Just like blood, the sensor gets darker with higher concentrations of CO. An optical sensor reacts to the changing color. These detectors are very accurate and are used in higher-end facilities such as hospitals, where the cost of a false alarm can be high.

CO detectors are available with wireless vibrating pads, strobes, or other remote warning devices. These are used for people with hearing impairments, low vision, or other sensory impairment. Hotels are becoming more likely to provide these in their accessible rooms, or upon request.

Regulation Can Make You Sick

The problem is that the Standard requires CO detectors is not allowed to sound for CO levels below 65 PPM. The UL considers this a false alarm and a nuisance. The CO alarm will only sound for concentrations of 65 – 145 PPM after 1 – 4 hours.

The Danger of Long-Term Exposure

All UL 2034 CO detectors state that they protect “Young Healthy Adults”. What about everyone else? Young children, the elderly, those with blood or cardiovascular disease and fetus’ can be affected by long term exposure to low levels of Carbon Monoxide.

Low levels of CO can come from poorly vented stoves, furnaces or water heaters that only burn fuel for short periods of time. If CO is getting into the home, it may not exceed 65 PPM for a period of time long enough to sound the alarm. This can result in daily exposure to Carbon Monoxide which has been shown to cause Oxidative stress in the
group listed above. A study performed by UCLA finds that exposure to even tiny amounts of CO can lead to many disorders.

There is a lot of discussion, even argument, over the proper installation height of CO detectors. Should they be on the ceiling? Can they be plugged in as many CO detectors are sold with a plug? Is CO lighter or heavier than air? Etc.

We are often asked how many detectors are required, and in which rooms they should be installed. According to the 2005 edition of the carbon monoxide guidelines published by the National Fire Protection Association, sections 5.1.1.1 and 5.1.1.2, all CO detectors “shall be centrally located outside of each separate sleeping area in the immediate vicinity of the bedrooms,” and each detector “shall be located on the wall, ceiling or other location as specified in the installation instructions that accompany the unit. “The fact is that CO has nearly the same specific gravity as air. Air has a specific gravity of 1 and CO has a specific gravity of just over .965. So, the CO detectors can be mounted just about anywhere with a few exceptions. They should not be mounted on the wall within 6 inches of the ceiling. This “pocket” is considered dead air that does not circulate or mix well with the rest of the air in the house. They can be mounted on the ceiling.

According to the 2009 edition of the IRC published by the International Code Council, “For new construction, an approved carbon monoxide alarm shall be installed outside of each separate sleeping area in the immediate vicinity of the bedrooms in dwelling units within which fuel-fired appliances are installed and in dwelling units that have attached garages”. New homes must have CO detectors installed consistent with Smoke Detectors.

You should follow the manufacturer’s installation recommendations as they have likely performed research to determine the best placement for their detector.

Some people believe that opening a window slightly will protect them from CO poisoning if, for example, they are using a kerosene heater or BBQ to heat their home. Since air and CO have essentially the same properties, the CO will not magically leave your home through an open window. You would need to exchange the air in your home with fresh air with the use of a fan. Blowing cold air in from the exterior would defeat the purpose of a heater.

If you lose electricity and need to heat your home, build a fire in the fireplace. Do not use a BBQ, Propane or kerosene heater, or generator inside your home for any period, or for any length of time. It is not safe to do so.

What Features to Look For

Look for the life rating on the detector. All CO detectors have a life of 5-7 years after which they must be replaced. This is due to the life and sensitivity of the sensor. You should write the purchase date on your detector when you put it into service.

The best way to deal with Carbon Monoxide is to avoid it in the first place.

If you start feeling sick you should first move to fresh air and see if you feel better. Don’t just assume you are getting a cold or flu and go to bed. If you feel better outside, you may have been exposed to Carbon Monoxide in the home.

You should have your gas burning appliances checked annually by a company or utility that actually checks for CO levels. You can also visually look at your water heater and the flue (pictured above), furnace and clothes dryer flue for signs of damage or obstruction. Birds and squirrels are known for building nests or hiding food in exhaust flues. This can prevent proper drafting of exhaust gases and they can find their way into your home.

If you have young children, older parents, or someone with health issues living in your house, you should consider getting a “Low-Level” CO detector.