Some Basic Information About septic systems

Do you know what happens when you flush a toilet? People in a city rarely give the answer much thought because their wastes usually go through a central sewer system to a wastewater treatment plant. However, suburban and rural homeowners often have on-site wastewater systems. They do need to pay attention because a failure in their system could affect their property, and even contaminate their drinking water. Unlike sewers, on-site systems collect, treat, and dispose of wastewater from your house right on your property. Therefore, the proper care and maintenance of your system is entirely up to you.

How Does A Septic System Work?

Most old houses are hooked up to a conventional septic system, although some properties may still have a cesspool or even a privy. Cesspools are large brick, stone, or concrete vaults where solids can settle. They were popular prior to the 1950s, but are now regulated out of existence in most areas of the country. Privies are simply outhouses over a hole in the ground that can be moved when filled. Privies are usually illegal, but you may find some in remote rural areas.

The typical septic system includes a septic tank (or tanks) designed to capture solids from household wastes, and a disposal field laid out to dispose of the liquid wastes. Wastes travel from the toilet, sink, shower, or washer through the indoor plumbing to the septic tank. The tank is a watertight, underground receptacle where bacteria break down the solid wastes.

As wastes move through the tank, the solids settle to the bottom, and the liquids pass on through to the outlet pipes. Anaerobic bacteria (bacteria that live in the absence of air) decompose the solid wastes over time. As the liquid passes through the tank, lighter particles and grease rise to the surface, forming a floating scum layer that remains in the tank. After leaving the tank, the liquid is dispersed to the ground through the disposal beds—perforated or open-jointed pipes buried in shallow, gravel-filled trenches. At this point the liquid still contains large numbers of harmful bacteria and organic matter. The soil absorbs these impurities before the liquid makes its way to underground water supplies. 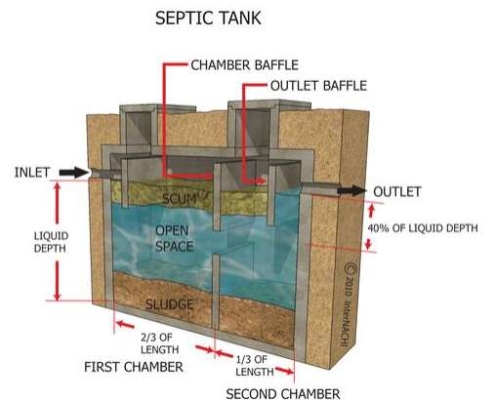 Diagram of a typical septic tank used in Westchester ny

Why Do Septic Systems Fail?

Solids are always accumulating in the septic tank because the rate of decomposition is much slower than the rate at which the system adds sewage. Some solids, in fact, will never decompose. Furthermore, the fats and grease that form the scum layer accumulate faster than the rate of decomposition. Baffles hold this scum layer in the tank. If the baffles are damaged, the scum may enter the disposal pipes, clogging them and causing them to malfunction. Failures may also occur if you flush inert, toxic, or non-biodegradable substances into your system. These materials will not decompose, and they may either kill the “good bacteria” or simply clog the tank. Additionally, large surges of waste and water into the system—the result of excessive usage—can either cause an overflow or disturb the balance of the system.

In older systems, the principal problems are deterioration of materials—particularly tank baffles—and clogging of laterals (pipes in the leach field). Very often, older houses employ converted cesspools or seepage pits that have been closed off to become septic tanks. Made of ceramic pipes or concrete blocks, these can easily crack or deteriorate over the years. Also earlier septic tanks and distribution boxes were often steel or concrete, which can rust and crack. Pipes were usually made of ceramics or tar paper composite, which last 20 to 30 years with proper use. Newer systems use precast concrete and fiberglass/plastic materials. 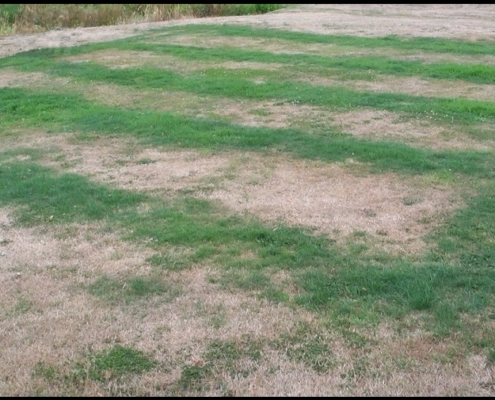 Warning Sign Of A Failing or Soon To Fail Septic System

Many homeowners—particularly those that live in older houses—are not sure where their tank and field are buried in relation to the house. It is most important that you locate the tank because eventually it will need service.

Most importantly, pump out your tank on a regular basis. When the tank is not cleaned, solids build up until they spill into the disposal field, where they block the flow of liquid. The frequency depends on the size of the tank and the number of people it services. Tanks should be inspected at least once every two years to determine the rate of sludge (solids on the bottom of the tank) and scum buildup. With ordinary use and care, a septic tank usually requires cleaning every two to four years (far more often if you use a sink-mounted garbage disposal unit).

Depending on the size of the tank and your location, plan on spending about $400 for each pump out. Before you contract with the service technician, ask him to check the tank baffles for possible damage. While the tank is open, the technician can also run some water from a hose into the distribution box to get an indication of how well the leach field is functioning. One caution: toxic gases build up in septic tanks, so never allow anyone to go into the tank. You should also exercise caution when simply peering in the tank.

Don’t plant trees or bushes near your disposal field. Roots can grow 30′ to 40′ from the base of a tree and rupture or dislodge the distribution box, connecting pipes, and laterals. Grass is the best vegetative cover for the disposal field. Also, don’t drive vehicles or heavy equipment over the disposal field. Watch for excessive water from inside the house. It will overload the tank, causing solids to rise to the top and clog the laterals. In the disposal field, excessive water can result in hydraulic overloading that reduces soil infiltration. One way to reduce the amount of water entering the system is to install water-saving toilets and shower heads. Try to distribute dish washing and laundry times throughout the week rather than at one or two sessions. Fix leaking toilets and faucets, and don’t connect sump pumps to the septic system.

Be careful about what you dispose into the system. Avoid pouring cooking oils, fats, and grease into the kitchen sink. Also resist using a sink-mounted garbage disposal. Don’t flush non-biodegradable items, such as disposable diapers, cat litter, filtered cigarettes, sanitary napkins or plastic tampon applicators, paper towels, condoms, or similar materials. Never flush toxic substances like used motor oil, paints (oil- or water-based), varnishes, photographic solutions, pesticides, insecticides, paint thinners or solvents. These chemicals can kill the useful bacteria in the tank and in the soil, as well as contaminate the groundwater.

Avoid biological additives, too, such as yeast or store-bought enzymes. None of these products have been found to have any significant value in improving performance or preventing failures. Don’t use septic system cleaners that contain toxic substances. Many over-the-counter solutions sold for septic system cleaning include chemicals that may be toxic, and they are generally not biodegradable. While these products may unblock a clogged disposal pipe, they can also contaminate drinking water or groundwater supplies.

How To Tell If Your System Is Failing

While there is no 100-percent accurate methods for detecting a failing septic system, suspect a problem if you see the following indicators:

Remember that effluent on the ground is a serious health hazard and should be corrected as soon as possible. Do not allow children or pets near a failing disposal field.

What To Do If The System Fails

Contact your local health department if you suspect that your system is failing. Also seek the services of a professional septic system contractor. Then work with both of these parties to develop a plan of action.