Have you taken a look at your water heater recently? They typically sit in our basements, and we really don’t think about them for years until one day you find them leaking, or worse, spilling gallons of water on the floor. There are a few maintenance tips I give home buyers during an inspection that I’d like to share and also some general inspection tips you can do every so often to try to avoid having gallons of water spilled on your floor.

First off, the maintenance tips. I always like to show homebuyers the Temperature Pressure Relief (TPR) valve. This is one of the major safety features on a water heater. You’ll usually find it on the side of the tank, sometimes on top. It should have a pipe attached to it that runs down the side of the tank and stops short of the ground (it should terminate within 6” of the ground). The TPR valve is
meant to release before the temperature gets too high or pressure builds up too much to the point where the tank would explode (do a Google search for some cool video). 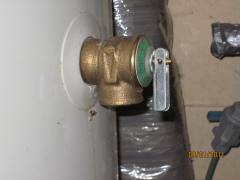 To do this, connect a short hose to the drain valve at the base of the water heater and run it to the main floor drain, laundry sink, bathtub or even outside. Shut-off the cold-water supply to the water heater (there should be a shutoff valve on the cold water piping just above the tank) and/or the electricity running to the water heater. Open a hot water faucet (maybe at the laundry sink if that’s nearby). And open the drain valve. Watch the water coming out, you might find that you have to turn the cold-water supply on and off to help flush the sediment out of the base of the tank. There’s a great video on how to do this here:

Let the hot water run at a faucet and listen to the water heater as it’s heating up water. Is the tank making noise? I’ve had some water
heaters that sound like they’re making popcorn inside the tank. The sound is the sediment in the bottom of the tank bouncing around as it’s heated up.

So, take some time to take a look at your water heater. Keep in mind
that the typical service life for water heaters is 10-12 years. That’s just the average. I’ve had people tell me their water heater dumped out at eight years. But with a little maintenance, you can get plenty of life out of them.