The answer is it might be if its not properly fastened in place.  Say what now? I didn’t know my range needed to be fastened in place.  Unfortunately, in most cases neither did the installer.  Anti-Tip brackets come with every range but most are thrown away without being installed.  But don’t worry if your range doesn’t have them,  it’s a simple fix.  this can be done without much trouble by installing an ‘anti-tip’ bracket behind the range.  Often times your home inspector will check to see if one is installed. Below is a picture of a typical slide in range anti-tip bracket. 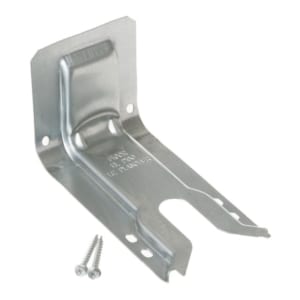 WHAT IS AN “ANTI-TIP” BRACKET ANYWAY?

An anti-tip bracket is a small clip that attaches to the wall or floor behind the range and prevents it from tipping over.    According to the Consumer Product Safety Commission (CPSC) there were around 38 fatalities associated with ranges tipping over in the years between 1980 and 2008, and far more injuries in addition to that number.  The fatalities were divided among children between one and 5 years old and elderly adults using the open range door for support.  If the range tilts forward and hot water or oil falls onto a child it could be a disaster.  One of my friends had this happen to him with bacon grease and I don’t want to see it happen to anyone else.  In response to this danger, the American National Standards Institute (ANSI) and Underwriters Laboratories (UL) created standards in 1991 that require all ranges manufactured after that year to be capable of remaining stable while supporting 250 pounds of weight on their open doors. Manufacturers’ instructions, too, require that anti-tip brackets provided be installed. 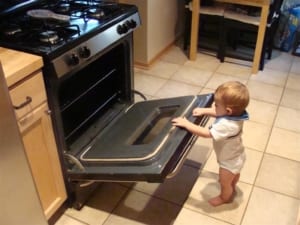 IS AN “ANTI-TIP” BRACKET REQUIRED?

HOW DO I KNOW IF ONE IS INSTALLED ON MY RANGE?

You might be able to see the bracket by looking behind the range with a flashlight, but some floor mounted brackets are hard to see from this angle.  Some ranges have removable drawers or as space between the range and the floor that will make it possible to see if one is installed.   The other way to test if one is installed is to carefully tip the range forward. It will only tip forward slightly if the range is properly secured in place. Make sure to remove everything from on top and inside the range before you attempt this.  There are many different types of ranges, but as far as I know all of them require an anti-tip bracket.  Different ranges have different brackets so look for one by make and model number of your range.

I DON’T HAVE ONE – WHAT SHOULD I DO NOW?

Anti-tip brackets are available from the manufacturer, big box stores, online and sometimes at appliance stores.  They only cost a few dollars and simply get screwed in place.  The range does need to be moved out of the way to do this, so make sure if you are doing this yourself you have an assistant and also make sure to protect your floors from damage because stoves are heavy and can easily damage wood floors.

Sterling Home Inspections is now available to perform mold testing as part of the home inspection process.  Home inspections can seem overwhelming as there is often a need to bring in multiple professionals in addition to the home inspection – inspections such as oil tank and septic systems. Now having mold and air samples taken doesn’t mean additional trips, extra scheduling and a delay in the due diligence process.  Sterling Home Inspections is certified and ready to provide complete mold testing services right at the inspection.  Buyers can either include basic testing of the air as part of the inspection or testing can be added if mold or suspected mold are uncovered during the inspection.  Full reports are provided from a certified laboratory and I provide a full explanation of those reports, so that everyone involved understands the test results and what are the appropriate steps to take, if any are recommended

I do not provide remediation services so my interpretation of the testing results are not biased by a need to sell you additional services.  When mold testing is performed in conjunction with a home inspection I can provide a more complete picture of what has occurred in the home that has allowed mold to grow.

Sterling Home Inspections provides you with unbeatable knowledge and information about your home or future home, including inspections for wood destroying insects, radon, water quality and now mold. For additional in formation visit:  http://www.sterlinghomeinspections.com/mold-testing

There’s a show on HGTV called Holmes Inspection, which exposes problems with houses that were allegedly missed by other home inspectors. Here’s the basic formula: Frank and Fran buy a house, have it inspected, no major problems. Time passes, problems show up, Mike Holmes gets called in. Mike inspects the house, agrees there’s a problem, tears everything open to show what was done wrong or could have been done better, and then says he’ll “make it right”. In the end, the original home inspector gets blamed for missing defects with the house.

I’ve had countless clients ask me about the show, and I’ve heard a lot of discussion about the show from other home inspectors, so I finally took the time to watch an episode to see what all the talk was about.

Holmes Inspection makes for great TV. I watched an episode titled Frigid Floor, wherein the homeowners complained about a cold floor at the addition of their house. There were a couple of other miscellaneous issues, but the big one was the cold floor. Mike Holmes doesn’t know exactly what the problem is, so he has his crew come in and cut out a huge section of the kitchen floor to get at the crawl space below. There is no final diagnosis of what the problem is, but his crew spares no expense in making it right.

They tear out all of the cabinets, countertops, flooring, and subfloor to get at the crawl space. They spend three days hand digging the crawl space to make it several feet deeper, install rigid foam on the floor, pour self-leveling concrete on the floor, then have the walls insulated with spray foam (I loved that part). While they’re at it, they also beef up the floor structure. They add access to the crawl space from inside the basement by cutting an opening through the foundation wall, and they add a heat register and a light. They definitely ‘make it right’.

If the previous owners got three different bids for the job, there’s a slim chance that the contractor who gave them a bid on a beautiful crawl space would actually get the job.

Just for the sake of argument, let’s say the inspection was done during the winter, the floor was cold, and the crawl space was barely accessible. What would the recommendation have been? Gut the kitchen and make it right? That suggestion would go over like a lead balloon.
Personally, I would have told the buyers that the floor was cold, and to fix it would probably be cost prohibitive. This is what you’re getting, take it or leave it.

I’m not trying to be too critical of the show, but the repairs performed on this house were completely over-the-top and unrealistic.
Don’t get me wrong, it’s a very cool concept for a show – take a problem with a house that is cost prohibitive to repair and fix it any way you want with time and money being no object. It would have been nice to do it this way from the start, sure… but I can’t imagine any sane person spending their own money gutting a kitchen just to make the floor warmer. This is a fun show to watch as long as you remember that it’s just TV. I think the main messages are good: hire an excellent home inspector and don’t skimp out on your remodel project. You’ll save money in the long run by spending a little more up front.