There’s a show on HGTV called Holmes Inspection, which exposes problems with houses that were allegedly missed by other home inspectors. Here’s the basic formula: Frank and Fran buy a house, have it inspected, no major problems. Time passes, problems show up, Mike Holmes gets called in. Mike inspects the house, agrees there’s a problem, tears everything open to show what was done wrong or could have been done better, and then says he’ll “make it right”. In the end, the original home inspector gets blamed for missing defects with the house.

I’ve had countless clients ask me about the show, and I’ve heard a lot of discussion about the show from other home inspectors, so I finally took the time to watch an episode to see what all the talk was about.

Holmes Inspection makes for great TV. I watched an episode titled Frigid Floor, wherein the homeowners complained about a cold floor at the addition of their house. There were a couple of other miscellaneous issues, but the big one was the cold floor. Mike Holmes doesn’t know exactly what the problem is, so he has his crew come in and cut out a huge section of the kitchen floor to get at the crawl space below. There is no final diagnosis of what the problem is, but his crew spares no expense in making it right.

They tear out all of the cabinets, countertops, flooring, and subfloor to get at the crawl space. They spend three days hand digging the crawl space to make it several feet deeper, install rigid foam on the floor, pour self-leveling concrete on the floor, then have the walls insulated with spray foam (I loved that part). While they’re at it, they also beef up the floor structure. They add access to the crawl space from inside the basement by cutting an opening through the foundation wall, and they add a heat register and a light. They definitely ‘make it right’.

If the previous owners got three different bids for the job, there’s a slim chance that the contractor who gave them a bid on a beautiful crawl space would actually get the job.

Just for the sake of argument, let’s say the inspection was done during the winter, the floor was cold, and the crawl space was barely accessible. What would the recommendation have been? Gut the kitchen and make it right? That suggestion would go over like a lead balloon.
Personally, I would have told the buyers that the floor was cold, and to fix it would probably be cost prohibitive. This is what you’re getting, take it or leave it.

I’m not trying to be too critical of the show, but the repairs performed on this house were completely over-the-top and unrealistic.
Don’t get me wrong, it’s a very cool concept for a show – take a problem with a house that is cost prohibitive to repair and fix it any way you want with time and money being no object. It would have been nice to do it this way from the start, sure… but I can’t imagine any sane person spending their own money gutting a kitchen just to make the floor warmer. This is a fun show to watch as long as you remember that it’s just TV. I think the main messages are good: hire an excellent home inspector and don’t skimp out on your remodel project. You’ll save money in the long run by spending a little more up front. 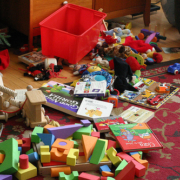 So You’re Having Your Home Inspected – How to Prepare 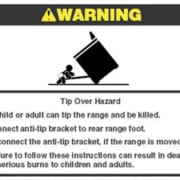 Is My Range In Danger Of Tipping Over? 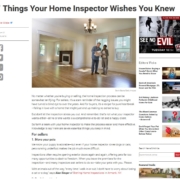 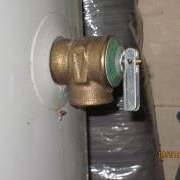 Why is My Water Heater Leaking?
0 replies

The Real Truth About Mold And Bleach
Scroll to top